11 a.m. - The body arrived at Bethlehem Chapel, Washington National Cathedral, with honor escort of generals and admirals. After a brief ceremony for family, honor guard and honorary civilian pall bearers, the body laid in repose for 28 hours.

3 p.m. - The casket was carried from Chapel to hearse. Cortege moved to 16th and Constitution Avenue, where the casket was placed on a caisson.

3:30 p.m. - The funeral procession moved down Constitution Avenue to the Capitol for ceremony, musical honors and a 21-gun salute. Inside the Capitol rotunda, the eulogy was delivered by President Richard Nixon, a presidential wreath was placed by casket and the body to lie in state until the following morning.

5 p.m. - Public admitted to Capitol rotunda to file past casket.

4 p.m. - The casket was carried to hearse for return to Washington National Cathedral.

5 p.m. - Casket placed in hearse for trip to Union Station.

10:30 a.m. - The funeral in Abilene took place on the grounds of the Eisenhower Presidential Library and Museum. The service began on the steps of the Library and concluded inside the Place of Meditation where Eisenhower is buried.

There were four gun salutes during the Eisenhower funeral ceremonies:

1. When the body was taken to the Capitol, a saluting battery (1 officer and 13 enlisted men) fired a 21-gun salute at 5 second intervals.

2. When the body arrived at Union Station, a saluting battery (1 officer and 13 enlisted men) fired a 21-gun salute beginning when the hearse entered Delaware Avenue with the last shot fired as the hearse stopped at the entrance at Union Station.

3. Before benediction in Place of Meditation, six howitzers manned by 2 officers and 36 enlisted men delivered a 21-gun salute. 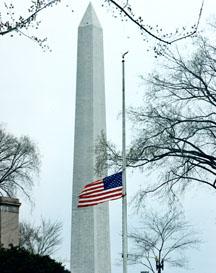 Source
US Army
Description
Flag at half-staff in Washington DC for the passing of General Dwight D. Eisenhower.
[71-456-41]

Outstanding elements of the interior design of the Place of Meditation are the richly colored windows, the Travertine marble wall panels, the walnut woodwork, and the large embroidered hanging, which carries the words of the prayer that President Eisenhower wrote for his first Inaugural Address on January 20, 1953. There is a meditation portion of the building where, according to General Eisenhower's wishes, it was hoped that visitors would reflect upon the ideals that made this a great nation and pledge themselves again to continued loyalty to those ideals.

The casket is $80 government issue requested by Eisenhower. The only difference between his casket and those furnished for any soldier buried by the Army is an inner glass seal that cost an extra $115. It was lined with tailored eggshell crepe.

General Dwight D. Eisenhower was buried in his World War II uniform. It consists of “pink” trousers and the green “Ike” jacket that he made famous. Although he was one of the most decorated military men in history, his uniform had only the following medals: Army Distinguished Service Medal with three oak leaf clusters, Navy Distinguished Service Medal, and the Legion of Merit.

The vault is bronze and cement. Both Dwight and Mamie's graves are covered with a marble slab. 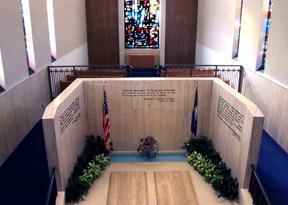 *Milton Eisenhower became ill and was hospitalized. General Andrew Goodpaster substituted for him as an honorary pall bearer.

Some of the songs played by the Fifth Army Band in Abilene, Kansas for the funeral:

Carillon music by the Fifth Army at the Place of Meditation: