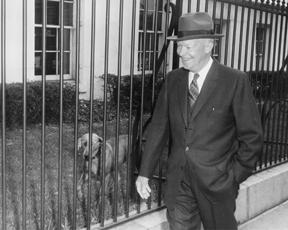 "During the time the President and Mrs. Eisenhower were in the White House they had only two pets in residence there. One was a parakeet. The other was the Weimaraner named Heidi, who, for a time, lived in the house and roamed the White House grounds at will. She was and is a wonderful dog and was a great favorite of the many tourists to the White House. Heidi is now on the farm here in Gettysburg and recently had two adorable puppies."

"Heidi is definitely an asset to life in the White House. She cavorts on the South Lawn at a great rate, with such important projects as chasing squirrels and investigating what might be under bushes. She is beautiful and well-behaved (occasionally she tends toward stubbornness but is then immediately apologetic about it). And she is extremely affectionate and seemingly happy. I am constantly indebted to you both for giving her to me . . ."