President Dwight D. Eisenhower was determined to solve “the fearful atomic dilemma” by finding some way by which “the miraculous inventiveness of man” would not be dedicated to his death, but consecrated to his life. In his Atoms for Peace speech before the United Nations General Assembly on December 8, 1953, President Eisenhower sought to solve this terrible problem by suggesting a means to transform the atom from a scourge into a benefit for mankind. Although not as well known as his warning about the “military industrial complex,” voiced later in his farewell radio and television address to the American people, President Eisenhower’s Atoms for Peace speech embodied his most important nuclear initiative as President. From it sprang a panoply of peaceful atomic programs. With it President Eisenhower placed the debate over the control of nuclear science and technology, which had largely been the province of government officials and contractors, squarely before the public. Indeed, the present public controversy over nuclear technology and its role in American society can be traced back to President Eisenhower’s determination that control of nuclear science was an issue for all Americans.

The Atoms for Peace speech reflected the President’s deep concern about “Atoms for War.” The escalating nuclear arms race between the United States and the Soviet Union, which included the development of thermonuclear bombs, brought President Eisenhower to the United Nations. Since Hiroshima the destructive power of nuclear weapons had increased dramatically. Nuclear weapons technology, thus far a product of American expertise, would also eventually enter the arsenals of the Soviet Union through the normal processes of technological development. President Eisenhower felt a moral imperative to warn the American people and the world of this new reality.

Rapid strides in nuclear weapons in nuclear weapons technology had begun at the end of World War II. In 1945 the two atomic bombs dropped on Japan had killed an estimated 106,000 people and had injured approximately 110,000 others. The larger of the two, the Nagasaki bomb, had released the explosive equivalent of 23,000 tons of TNT. In 1948 the United States had tested even larger atomic bombs in the Pacific, and by 1949 the Soviet Union had achieved its own nuclear capability with the detonation of a nuclear device. In response to the Soviet atomic bomb program, the United States had embarked upon a crash program to develop an even larger weapon, the hydrogen bomb, which promised explosive power in the range of millions of tons of TNT. The United States successfully detonated a hydrogen device in November 1952; just a few days before Eisenhower won the presidency. The awesome 10-megaton blast had destroyed the test island of Elugelab, creating an underwater crater 1,500 yards in diameter. With it the United States and the world entered the thermonuclear age. 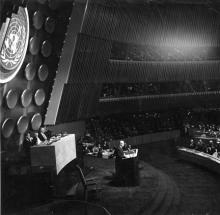 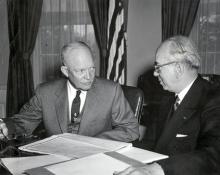 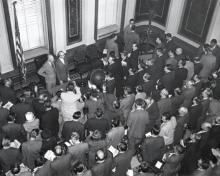 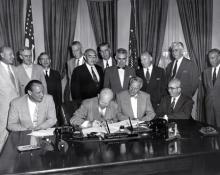 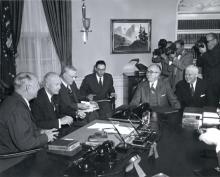