Senator Joseph R. McCarthy was a little-known junior senator from Wisconsin until February 1950 when he claimed to possess a list of 205 card-carrying Communists employed in the U.S. Department of State. From that moment Senator McCarthy became a tireless crusader against Communism in the early 1950s, a period that has been commonly referred to as the "Red Scare." As chairman of the Senate Permanent Investigation Subcommittee, Senator McCarthy conducted hearings on communist subversion in America and investigated alleged communist infiltration of the Armed Forces. His subsequent exile from politics coincided with a conversion of his name into a modern English noun "McCarthyism," or adjective, "McCarthy tactics," when describing similar witch hunts in recent American history. [The American Heritage Dictionary gives the definition of McCarthyism as: 1. The political practice of publicizing accusations of disloyalty or subversion with insufficient regard to evidence; and 2. The use of methods of investigation and accusation regarded as unfair, in order to suppress opposition.] Senator McCarthy was censured by the U.S. Senate on December 2, 1954 and died May 2, 1957.

Draft page, "Sixth Draft" of Eisenhower speech given on October 3, 1952 in Milwaukee, Wisconsin on "Communism and Freedom" [Stephen Benedict Papers, Box 4, 10-3-52 Milwaukee, Wisconsin (1); NAID #16614761] (The deleted paragraph refers to accusations made by McCarthy against General George C. Marshall and was removed from the speech to avoid causing bad feelings in McCarthy's home state of Wisconsin.)

The Politics of Fear: Joseph R. McCarthy and the Senate by Robert Griffith, University Press of Kentucky, Lexington, 1970.

Many Are the Crimes: McCarthyism in America by Ellen Schrecker, Little, Brown, Boston, 1998. 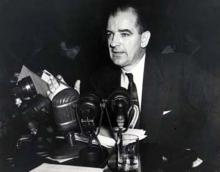 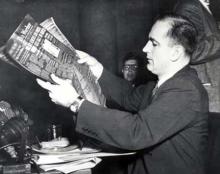 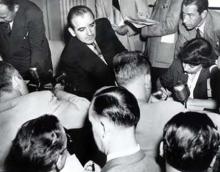