Sputnik and the Space Race

If an American happened to be gazing at the stars on Friday, October 4, 1957 he may have noticed an object crossing the evening sky. Radio listeners, too, may have heard a series of "beep, beep, beep" sounds coming from their radios. A momentous event had occurred in the region of the Soviet Union known as Kazakhstan -- the Soviets had launched an artificial satellite into orbit around the earth. The satellite named Sputnik, Russian for "traveling companion," transmitted the beeping sounds as it followed its orbit around the globe. Rather than celebrating this momentous scientific feat, Americans reacted with a great deal of fear. The event came at a period near the end of the McCarthy communist "witch hunts," a time when schoolchildren were involved in "Duck and Cover" air raid drills, and citizens were encouraged to build their own civil defense shelters. It was widely believed that if the Soviets could launch a satellite into space, they probably could launch nuclear missiles capable of reaching U.S. shores.

...The Heavens and the Earth: A Political History of the Space Age, Walter A. McDougall, Basic Books, Inc., Publishers, New York, 1985.

A Scientist at the White House: The Private Diary of President Eisenhower's Special Assistant for Science and Technology, George B. Kistiakowsky, Harvard University Press, Cambridge MA, and London England, 1976.

Spaceflight and the Myth of Presidential Leadership, edited by Roger D. Launius and Howard E. McCurdy, University of Illinois Press, Urbana and Chicago, 1997.

Sputnik, Scientists, and Eisenhower: A Memoir of the First Special Assistant to the President for Science and Technology, James R. Killian Jr., The MIT Press, Cambridge, MA and London, England, 1977. 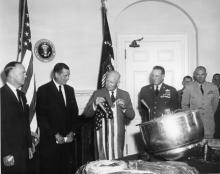 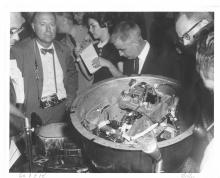 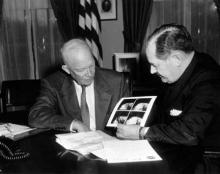 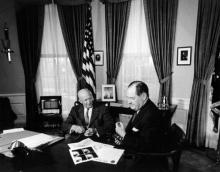 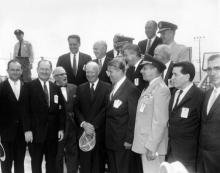 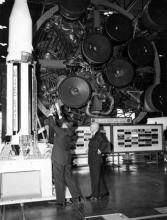 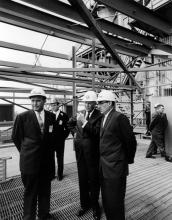