After five years of simmering tensions on the Korean peninsula, the Korean War began on June 25, 1950, when the Northern Korean People's Army invaded South Korea in a coordinated general attack at several strategic points along the 38th parallel, the line dividing communist North Korea from the non-communist Republic of Korea in the south. North Korea aimed to militarily conquer South Korea and therefore unify Korea under the communist North Korean regime. Concerned that the Soviet Union and Communist China might have encouraged this invasion, President Harry S. Truman committed United States air, ground, and naval forces to the combined United Nations forces assisting the Republic of Korea in its defense. President Truman designated General Douglas MacArthur as Commanding General of the United Nations Command (UNC).

The first several months of the war were characterized by armies advancing and retreating up and down the Korean peninsula. The initial North Korean attack drove United Nations Command forces to a narrow perimeter around the port of Pusan in the southern tip of the peninsula. After the front stabilized at the Pusan perimeter, General MacArthur surprised the North Koreans in September 1950 with an amphibious landing at Inchon behind North Korean lines, forcing the North Koreans to retreat behind the 38th parallel.

In October, the United Nations, urged by the United States Government, approved the movement of UN forces across the 38th parallel into North Korea in an effort to unify the country under a non-communist government. In spite of warnings issued by the Chinese Government, the United Nations forces moved toward the Yalu River, marking the North Korean border with Manchuria. Discounting the significance of initial Chinese attacks in late October, MacArthur ordered the UNC to launch an offensive, taking the forces to the Yalu. In late November the Chinese attacked in full strength, pushing the UNC in disarray south of the 38th parallel with the communist forces seizing the South Korean capital, Seoul.

In early 1951 the Chinese offensive lost its momentum and the UNC, bolstered by the revitalized 8th U.S. Army led by General Matthew B. Ridgway, retook Seoul and advanced back to the 38th parallel. From July 1951, until the end of hostilities the battle lines remained relatively stable and the conflict became a stalemate. The Truman Administration abandoned plans to reunite North and South Korea and instead decided to pursue limited goals in order to avoid the possible escalation of the conflict into a third world war involving China and the Soviet Union. When General MacArthur publicly challenged the Truman Administration's conduct of the war, the President, "...concluded that...MacArthur is unable to give his wholehearted support to the policies of the United States Government..." and relieved him from command in April 1951, replacing him with General Ridgway.

Acting on a campaign pledge, President-elect Dwight D. Eisenhower went to Korea on December 2, 1952. After visiting the troops, their commanders and South Korean leaders, and receiving briefings on the military situation in Korea, Eisenhower concluded, "we could not stand forever on a static front and continue to accept casualties without any visible results. Small attacks on small hills would not end this war." President Eisenhower sought an end to hostilities in Korea through a combination of diplomacy and military muscle-flexing. On July 27, 1953, seven months after President Eisenhower's inauguration as the 34th President of the United States, an armistice was signed, ending organized combat operations and leaving the Korean Peninsula divided much as it had been since the close of World War II at the 38th parallel.

The Korean War and its Origins, 1945-1953 (Truman Presidential Library) 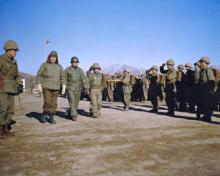 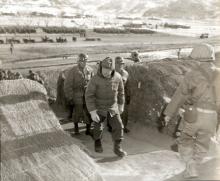 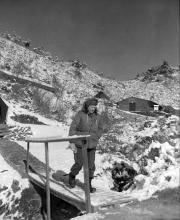 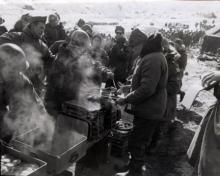