Monuments Men and the Allied Effort to Save European Cultural Heritage

The Monuments, Fine Arts, and Archives program, often referred to as the Monuments Men, was an international group established in 1943 that worked under the Civil Affairs and Military Government Sections to help protect cultural property during and after World War II. Their mission was to identify art, architecture, monuments, and archives that needed to be preserved; work with Allied commanders to limit damage to these cultural resources; work with local officials to stabilize and repair damages to monuments and architecture; identify and locate art, archives, and other cultural resources that had been removed by German forces; gather recovered works into staging areas for identification and preservation; and return the works to legitimate owners.

General Dwight D. Eisenhower, Supreme Allied Commander, inspects art treasures looted by the Germans and stored in the depths of a salt mine in Germany along with gold, silver, and paper currency. The mine was captured by U.S. Third Army troops. Behind Eisenhower are Omar Bradley (left), commanding general of the 12th Army Group, and (right) Lt. Gen. George S. Patton, commanding general of the Third Army. April 12, 1945. [U.S. Army photo 66-78]

Civil Affairs and Military Government Activities in Connection with Monuments, Fine Arts and Archives -- This report from the General Board, U.S. Forces, European Theater is available online at the Combined Arms Center at Fort Leavenworth, Kansas

Records of the Monuments, Fine Arts and Archives (MFAA) Section of the Reparations and Restitution Branch, OMGUS, 1945-1951 -- These are the official records of the MFAA and are held by the National Archives in College Park, Maryland. A guide to these records is available online. (These records have been digitized and are available by subscription on Fold3, an Ancestry.com web site.)

Holocaust-Era Assets -- A Finding Aid to Records at the National Archives at College Park, Maryland, requests for these materials should be directed to archives2reference@nara.gov. Listed below are the guides to records available in the research room in College Park, as well as select digitized documents that are available online.

A sampling of images relating to looted art 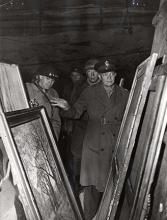